Trucks of the Soviet Union

‘If you want “The Definitive History” (for that is the sub-title) of Soviet-era trucks, then this impressively-designed-and-produced hardback is for you’ – Truck & Driver

‘Every so often, a book comes along that really stands out from the crowd. … Interesting and informative: Trucks of the Soviet Union is  not just a book, it’s a history lesson!’ – Classic Truck

Following the author’s highly regarded Cars of the Soviet Union and Cars of Eastern Europe, this sister title is a detailed record and history of the trucks produced by the Soviet Union and its successor nations. It is also a unique collection of pictures and photographs of these trucks, with particular emphasis on the post-war era. The author explores the historical and socio-economic context within which the Soviet Union developed its truck industry and the intimate relationship between trucks and life in the Soviet Union. Finally he looks at the changing shape of the post-Soviet truck industry in the post-communist era. Extending to 150,000 words and 380 pictures, this is the definitive history of soviet trucks.

When the Communists raised the red flag over Russia in October 1917, they inherited a country with virtually no truck industry. Britain, Germany, America and France had factories mass producing trucks; the Russians had a few tiny assembly plants, bolting together imported components. By the time of the Soviet Union’s demise at the end of 1991, its engineers, designers and workers had created one of the world’s largest truck industries. To do that, they had faced and overcome huge challenges.

The Soviet Union’s communist system was the world’s first attempt to create a new type of society, one that rejected the often chaotic and unstable rules of capitalism. For more than seventy years, trucks in the Soviet Union were designed and built to be part of a vast planned and ordered transport system, interacting rather than competing with trains and waterways. Each factory built specific trucks with their own roles to play in the grand design of the planned economy. Politics and revolutionary expediency were never far from the design studio, or the shop floor, making this a story as much about a nation as it is about an industry.

The vast natural environment also played its part. Soviet truckers were faced with driving huge distances across a landscape that included some of the coldest and hottest places on earth, a country that spanned Europe and Asia, the Arctic Circle and the Caucasus region. Service stations and motorways were few and far between in such a huge country, making reliability and serviceability far more important than driver comfort.

Trucks of the Soviet Union recounts how the truck industry helped build Soviet industrial might, shares the chaos and pain those proud truck makers suffered after the hammer and sickle was hauled down from the Kremlin flag poles, and reveals the newly confident and buoyant truck industry that has risen from its post-Communist ashes to become a part of a newly resurgent Russia. 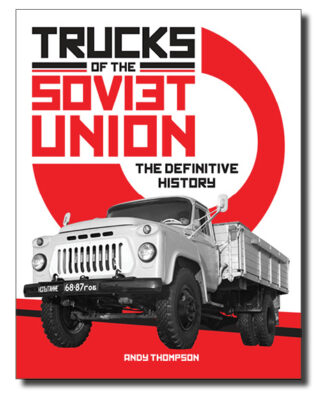 You're viewing: Trucks of the Soviet Union £45.00
Add to basket