Cars of the Soviet Union

The definitive history of Soviet cars

This is the fascinating story of Soviet cars from the birth of the Soviet Union in 1917 until its demise in 1991, including a chapter dedicated to the post-Soviet era. It is the story of an insular, state-run car industry in which the carefully thought-out ideas of ministerial planners, rather than the fickle nature of customers in a free market, determined what cars were made. The cars of the Soviet Union therefore have a unique heritage: designed for a social purpose, influenced by politicians, built with military needs in mind and sold in a country where the open road could be a 300-mile track across a windswept steppe. The development of these cars is described in astonishing detail, supported by hundreds of photographs, making this the definitive history. This second edition has been been updated to include developments in the decade since its original publication in 2008.

When the Communist Party took control of Russia and neighboring states in October 1917, it inherited a country with virtually no motor industry. While Britain, Germany, America and France already had factories mass producing cars, the Soviets had three tiny assembly plants and a large vehicle workshop in Moscow. However, by the time the Soviet Union dissolved at the end of 1991, its engineers, designers and workers had created one of the world’s largest motor industries.

What made the Soviet motor industry so different was its unique background. The Soviet Union’s communist system was the world’s first and largest attempt to create a new type of society. For more than 70 years, cars and vans were designed and built not to win market share and make ever-greater profits but to meet a clear social and economic purpose. Every car and van had a place and a role to play in keeping the wheels of Soviet society turning; designers and engineers were given clear instructions on what that place and role would be. Ideology and policy were never far from the top of those design briefs, either to demonstrate to the West during the Cold War that communist engineering was just as good as the capitalist kind or to offer a carefully graded structure of cars to reward revolutionary heroes.

The vast natural environment also played its part. Soviet motorists were faced with driving huge distances across a landscape that included some of the coldest and hottest places on earth, a country that spanned Europe and Asia, the Arctic Circle and the Caucasus region. Service stations and motorways were few and far between in such a huge country, making reliability and serviceability far more important than chrome and carpets.

The rest of the world took note and Soviet-made vehicles were sold across the globe. Three decades after the demise of the Soviet Union itself, its cars and vans are still to be found, living examples of what was a truly unique motor industry. Cars of the Soviet Union is the story of those vehicles. 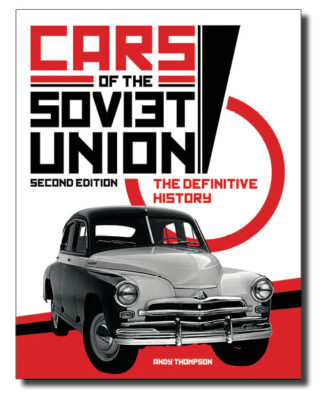 You're viewing: Cars of the Soviet Union £45.00
Add to basket