‘Here’s a special Father’s Day present. The Volkswagen Golf Story is written by my mate Russell Hayes – one of the UK’s best automotive authors – and covers every incarnation of VW’s second people’s car. Lavishly photographed with great text, it’s everything you ever wanted to know about Wolfsburg’s wonder.’ – Quentin Willson on The Volkswagen Golf Story, First Edition

The definitive history of the second people’s car

The Volkswagen Golf is a motoring paradox, seemingly never really changing its look but always pushing technical development forwards, a ‘classless’ car which still carries a ‘premium’ feel about it. While the Golf wasn’t the first front-wheel-drive hatchback, its interpretation established the template for others to follow and the benchmark by which they are still judged today.

As this motoring icon nears its 50th anniversary, The Volkswagen Golf Story, already the definitive history of the Golf, has been expanded and updated to include the full Golf 7 range and the latest incarnation, the Golf 8. Comprehensive and expertly researched, it remains a timely reminder of the Golf’s enduring appeal and a fitting tribute to Volkswagen’s second people’s car.

Russell Hayes is a London-based motoring author. As of 2021 he has written eight books, including the first edition of The Volkswagen Golf Story in 2014, marking its first 40 years. He has also written about the Volkswagen Beetle and Type 2 van. Other subjects have been as mixed as Lotus, the Ford Cortina, Aston Martin V8s and the Earls Court Motor Show. He was formerly a motoring journalist for British magazines and national newspapers, and has worked for TV programmes such as Top Gear, The Car’s the Star and Driven. 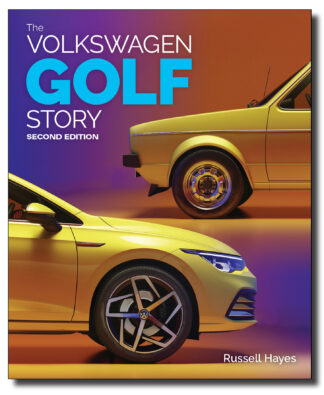