‘Here’s a special Father’s Day present. The Volkswagen Golf Story is written by my mate Russell Hayes – one of the UK’s best automotive authors – and covers every incarnation of VW’s second people’s car. Lavishly photographed with great text, it’s everything you ever wanted to know about Wolfsburg’s wonder.’ – Quentin Willson, Sunday Mirror

40 years of the second people’s car

In May 1974 the Volkswagen Golf first met its public. It was a bold successor to the Beetle – the original ‘people’s car’ – and forty years on, with more than 30 million produced, the second people’s car is still top of the sales charts.

The Volkswagen Golf Story: 40 years of the second people’s car by Russell Hayes is a meticulously researched celebration of the Golf, in the fullest detail yet. Containing over 300 photographs and much original material, it is both a timely reminder of the Golf’s enduring appeal and a fitting tribute to a motoring legend.

“After decades of making Beetles, the Golf played a huge part in Volkswagen’s survival into the 1970s,” Russell says. “It bet the bank that the new Golf would succeed, and the bet paid off.”

The Golf didn’t invent the idea of the front-wheel-drive hatchback, but Volkswagen’s interpretation established the benchmark by which the competition is still judged today.

The book describes all seven generations of Golf and includes the development of the groundbreaking Golf GTI, the Cabriolet and Volkswagen’s small-diesel revolution. It features fascinating photographs of early prototypes, new interviews with key Volkswagen personnel and contains sections on electric and hybrid Golfs plus the Golf in motor sport.

This is author Russell Hayes’ fourth motoring history, following books on Lotus, TVR and the Ford Cortina. He was formerly a motoring journalist for British magazines and national newspapers, and has worked for TV programmes such as Top Gear, The Car’s the Star and Driven. 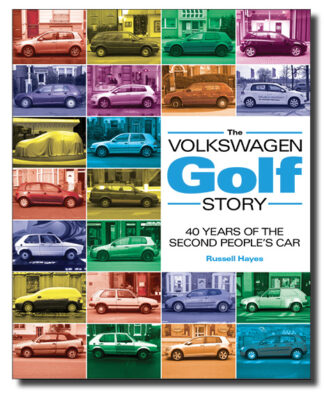 You're viewing: The Volkswagen Golf Story £40.00
Add to basket